whose public performance has looked grim compared with its private fundraising.

Private investments in six of the 10 best-funded U.S. tech startups to go public since 2015 have fallen from the peak levels they hit in funding rounds before the companies’ stock debuts, according to a Wall Street Journal analysis of data from research firm Pitchbook.

Uber investors paid an average of $48.77 a share between December 2015 and October 2018 for a total of $8.6 billion—one of the largest fundraising hauls ever for a startup. Uber, which went public two weeks ago, now trades at about $40 a share.

According to the Journal analysis, late-stage private investors in the six companies would have done far better investing in the broader stock market. The Nasdaq is up about 50% since the beginning of Uber’s fundraising round. In a seventh company,

the value of a 2015 private investment has gone up, but only by about half as much as the Nasdaq.

stock is still pricier than its last private valuation. But its public debut has disappointed investors, with its stock down around 19% from its March initial public offering.

With Uber and Lyft, “there’s no profitability within sight even with binoculars and that’s been a tough pill for investors to swallow,” said Daniel Ives, a tech analyst at Wedbush Securities.

“It’s a totally different ballgame trying to get public investors around the valuations,” he said.

Over the past half-decade, venture investors have pumped tens of billions of dollars into the largest startups, betting that stock-market investors would look beyond companies’ heavy losses and embrace their visions of industry disruption—a position that so far looks increasingly dissonant.

Despite Wall Street’s apparent skepticism, the flood of cash continues. Food-delivery company DoorDash Inc.on Thursday announcednew funding at a valuation of around $12.6 billion—nine times what it was a year ago. Last week, European food delivery company Deliveroo announced a $575 million investment from

Every few days it seems, the Silicon Valley startup machine elevates some new company to a valuation over $1 billion, often aiming for a rich IPO some years down the line. Recent entrants include a company that makes luggage and another that handles drone delivery of medical supplies.

Startup investors—particularly early-stage venture capitalists—are betting on founders that they think have compelling visions of technology that could drive wholesale industry change. They expect that many of their gambles won’t pan out—but think of IPOs as a way to cash in on successful bets.

Public investors tend to look at projections for cash and earnings. They’re more inclined to fill their portfolio with financially healthy companies that will perform well in the foreseeable future.

That difference has long existed, though the balance has shifted over the years. Stock-market investors a generation ago were far more forgiving. The dot-com boom of the 1990s was propelled not just by venture capitalists betting on rapid adoption of everything online, but also by Wall Street, which poured money into stocks with little or no revenue like Pets.com and Webvan, which had hopes of profit but no track record.

Amazon is often pointed to as a model of how companies that lose money early on can then turn a profit. But its losses were modest by today’s standards. Its combined net losses over its first nine years totaled $3 billion, or roughly $4.5 billion adjusted for inflation, before it turned profitable in its 10th. Uber, 10 years old, lost $3.7 billion in the 12 months through March.

Today, companies are staying private for years longer, leaving it to private investors to fund their growth and make the risky early bets. Public investors tend to want something more predictable by the time companies begin trading.

Despite the rough market debuts of some startups, venture capitalists point out that many of the companies are still wild successes for early investors.

The stock-market discontent with Silicon Valley has largely been aimed at the best-funded startups. Overall, U.S. startups that went public since 2015 have performed well, with public valuations at IPO an average of around 90% above the last private-market valuations, according to PitchBook.

Shares in software companies such as

which serve businesses instead of less-predictable consumers, have soared since listing. Zoom Video Communications Inc., which consumed a meager $160 million of venture capital before its IPO, is now worth around $19 billion, or roughly 19 times its peak private share price. Unlike Uber, Lyft, Snap and Pinterest, Zoom is profitable. 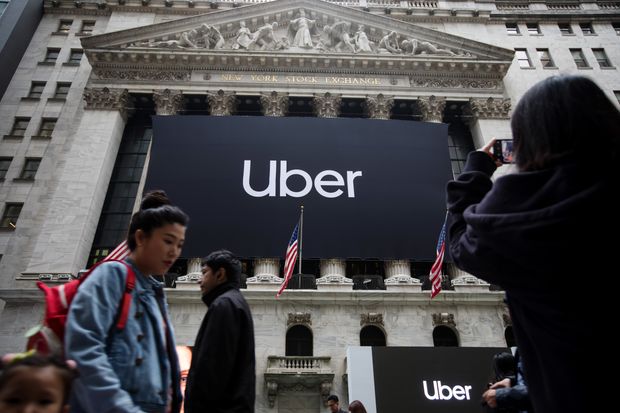 In marketing itself to stock-market investors, Uber has pushed a big-future narrative, saying that it hopes to eat into a big chunk of all transportation spending, and that profits today aren’t the priority. Like WeWork Cos., the shared-office-space giant that is valued at $47 billion as its loss last year exceeded its revenue, Uber compares itself to Amazon, kindling hope that it too will one day turn on the profit spigot.

“One of the hardest concepts for people in a public-company realm is where startup valuations come from,” said Eric Ries, a Bay Area entrepreneur who is CEO of the Long Term Stock Exchange. Mr. Ries has positioned his venture-capital-backed exchange—approved by the Securities and Exchange Commission the morning of the Uber IPO—as a way to let companies’ visions play a greater role, as longer-term investors would be more amenable to spending on experiments and new business lines.

One of the challenges for the better-funded consumer companies is that when they are considered a good bet, they often are swarmed by investors pushing up their valuations early on, before it is clear how long rapid growth can continue, and before paths to profit are fully ironed out.

That’s in part because there is more money than ever hunting for big hits. A record $132 billion of investment went into U.S. startups in 2018, a giant jump from $47.8 billion five years earlier, according to PitchBook.

In the past few years, that private-tech category has exploded with interest from global mutual funds and sovereign-wealth funds, which have poured into startups that are already well established.

, whose chief executive, Masayoshi Son, has been on a frantic investment spree around the globe, has a nearly $100 billion tech fund and is planning to raise another. It has pumped billions into WeWork and sectors like food delivery and it is the largest investor in Uber and other ride-hailing companies.

For Uber, Snap and others, the investors were “betting the market will believe the narrative,” said Brent Goldfarb, a management professor at the University of Maryland who has researched market bubbles.

Since receiving their top-dollar private rounds, some of the better-funded companies’ visions of future expansion have been tempered. When Snap raised money in 2015 and 2016, it was still adding users rapidly, but since then, user growth has stalled.

Uber raised much of its late-stage capital haul in 2015 and 2016, before it pulled out of China, Southeast Asia and Russia and before its executive team was replaced. Its revenue has recently flattened after years of rapid growth amid increased competition.

The public markets could eventually warm to these new business models. Facebook Inc. had a disappointing public debut before going on to become one of the world’s most valuable corporations.

“It’s very hard to look at these things in a very narrow period of time,” said Roger Lee, partner at Battery Ventures, which invests in startups in various stages of maturity and has backed online retailer Wayfair and

Few have more at stake in this area than SoftBank. Its initial investment in Uber is up about 20%—it bought shares from existing investors at a discount in late 2017—a modest return compared with others in its portfolio. It’s unclear how long the company plans to hold its Uber stake; it often holds stock of public companies for years.

Mr. Son has made clear his investment style is closer to that of a venture capitalist than a public-market investor looking at future cash flows.

“To SoftBank Group, vision matters most,” he told investors in February.

As an investor, do you give more weight to a company’s long-term vision and potential or its financial health in the near term? Join the conversation below.