Uber made a startling admission: It may never be profitable. The warning serves as a chilling reminder of the dotcom crash.

Uber filed to go public on Thursday, dumping a 300-page prospectus on potential investors about its sprawling $11.3 billion business empire.Bloomberg’s Shira Ovide described it as the “most complex S-1 I’ve ever read.”

Among the revelations contained in this tome were details of Uber’s love/hate relationship with former CEO Travis Kalanick, revelations aboutwho’s going to get rich when Uber joins Wall Street, insight on itsbattle to maintain drivers as contractors rather than employees, and information on its relationship with Google.

But also within the pages of the prospectus was a startling revelation: Uber admits it may never be profitable. The ride-hailing company, which posted a $3 billion operating loss last year, said: “We expect our operating expenses to increase significantly in the foreseeable future, and we may not achieve profitability.”

The document goes on to list a litany of risk factors. These range from its huge spending on things like drivers, “unproven” revenue lines, and the danger ofunrealized cost savings from its Careem acquisition, to the fact that Uber Eats (Uber’s food delivery business) makes a loss on some of the partnerships it has with big chains like McDonald’s.

“We will need to generate and sustain increased revenue levels and decrease proportionate expenses in future periods to achieve profitability in many of our largest markets, including in the United States, and even if we do, we may not be able to maintain or increase profitability,” Uber said.

A chilling reminder of the dotcom crash

The admission is far from ideal, but it is also far from unusual in today’s IPO market. Lyft’s S-1 contained very similar language – “we have a history of net losses and we may not be able to achieve or maintain profitability in the future” – while Snap also said it “may never achieve or maintain profitability” when it went public in 2017. Two years on, Snap is still loss-making.

In fact, more companies than ever are going public without any profits to speak of.

According to research from University of Florida finance professor Jay Ritter– illustrated wellhere in Recode– 81% of US companies floated as loss-making entities last year. The graph below, produced by Ritter, shows the percentage of IPOs with negative earnings per share since 1980. 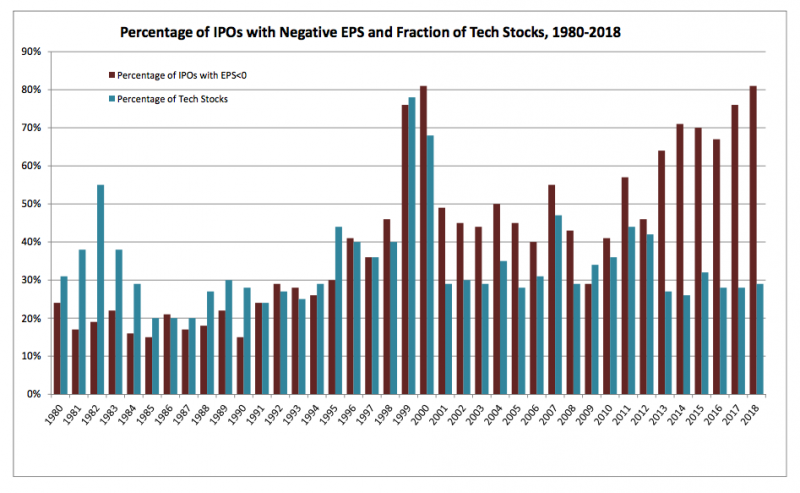 For tech firms, it was even higher at 84%, largely driven by biotech companies raising money. In fact, the last time so many tech firms were going public without making any money was in 1999 and 2000, when 86% of the internet companies that turned to Wall Street were unprofitable.

The turn of the millennium was, of course, the year the dotcom bubble burst, leading to the death of companies like Pets.com, Kozmo.com, and theloss of around 200,000 jobs in Silicon Valley.

Uber has been honest about its profit-making potential, but it need not look far for an example of success. Amazon was the prince of no profit when it first arrived on Wall Street in 1997, withQuartz pointing out that it lost a total of $2.8 billion over the first 17 quarters after its IPO. Now, Amazon makes more than $3 billion a quarter – as much money as Uber lost over the whole of last year.