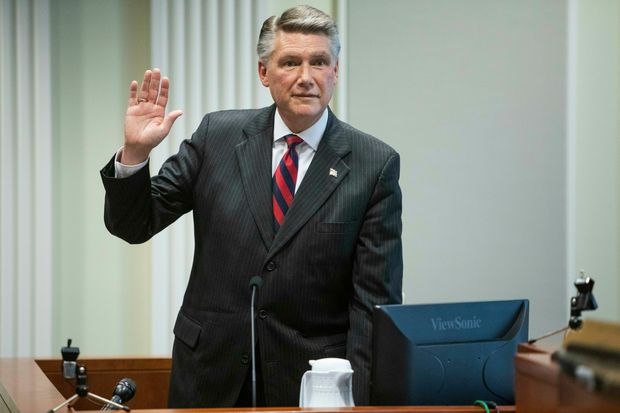 Republican candidate Mark Harris, who testified at a state board of elections hearing on an alleged absentee-voter scheme organized by one of his election contractors, said evidence of ballot tampering had convinced him a new election was needed.

Republican Mark Harris said Tuesday he won’t run in the redo election for North Carolina’s ninth congressional district, less than a week after the state board of elections called for a new election in light ofevidence of ballot tamperingby a contractor paid by his campaign.

Mr. Harris hadappeared to winthe Nov. 6 race for the Charlotte-based congressional seat, leading Democrat Dan McCready by 905 votes. Mr. Harris attended orientation for congressional newcomers in Washington, D.C., and had repeatedly said he should be certified as the winner—until last Thursday, when hecalled for a new electionat an evidentiary hearing into election fraud.

Mr. Harris said in statement Tuesday that he is focused on recovering from a recent infection that resulted in his hospitalization and from two strokes. He said he owes it to his wife, children and grandchildren to protect his health.

“I also owe it to the citizens of the Ninth District to have someone at full strength during the new campaign,” he said.

Mr. Harris didn’t mention the continuing investigation into work done soliciting absentee votes by a contractor on his behalf. The state board said it would turn over the results of its investigation to prosecutors.

State GOP Chairman Robin Hayes said the party supports Mr. Harris’s decision not to run. “There are numerous quality candidates that are discussing a run,” Mr. Hayes said in a statement. “We have no doubt that a competitive nominee will emerge.”

Mr. Harris asked his supporters to back Stony Rushing, a gun-range owner and commissioner in Union County, southeast of Charlotte.

The state board has yet to set dates for the primary and general election, which are likely to be in conjunction with a special election in the state’s third district, which is vacant in the wake of the death of longtime Republican U.S. Rep. Walter Jones.

Mr. McCready, the Democrat, told supporters Friday he is running again, and has called the redo of the election a victory for democracy.

The ninth district is heavily Republican, and the nonpartisan Cook Political Report rates the race a tossup. Mr. McCready raised $6.6 million to Mr. Harris’s $2.1 million in last year’s election, according to OpenSecrets.org.