Facebook’s deliberations about the notorious conspiracy theorist Alex Jones have been laid bare in a lengthy email trail seen by Business Insider.

On the dayFacebook announced it was barring white nationalism and white separatismfrom its platform, more than 20 Facebook and Instagram executives discussed an inflammatory post by the Infowars host.

It followsBusiness Insider’s reporting the post to Instagram on Wednesday. It featured a picture of a painting by the US artist Mear One that is considered to have anti-Semitic messaging.

The painting shows what appear to be caricatures of six Jewish men sitting around a Monopoly board, which is being held up by four subservient figures, shorn of their clothes. The post has been deleted. 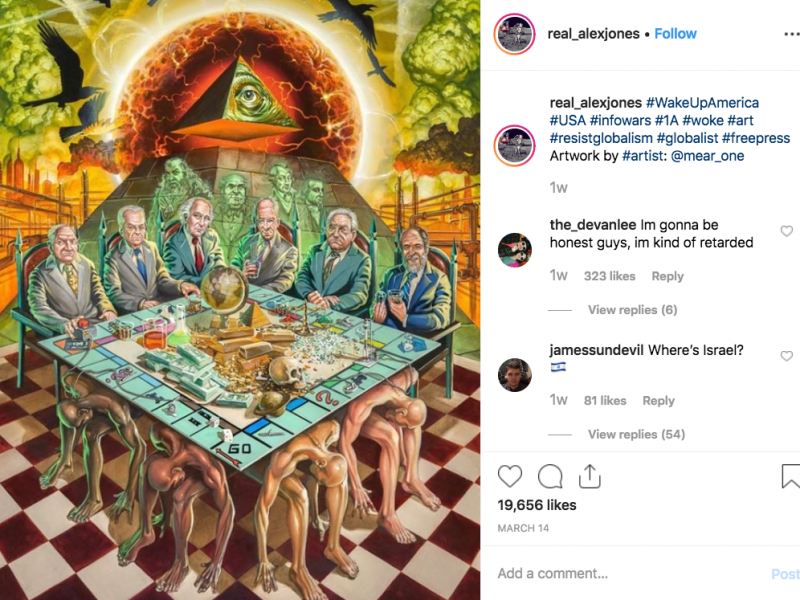 Foto: The Mear One painting posted by Alex Jones on Instagram.sourceAlex Jones/Instagram

The discussion offers a window into the intense deliberations Facebook has about content that could breach its community standards. It revealed conflicts of opinion, layers of process, and sensitivity to how its actions will be portrayed in the press at a time when the company is under unprecedented scrutiny.

Business Insider has chosen not to identify the executives involved in the discussion, to avoid the risk of their being targeted by Jones’ acolytes.

The post was escalated to Facebook’s risk-and-response team in Ireland. Initially, the team said the post did not violate Facebook’s community standards, according to an email from an escalations specialist. Another executive on Facebook’s content-policy team agreed with the decision.

In the message, reprinted and pictured below, the escalations specialist said that there have been “internal discussions” about Jones and his designation as a “hate figure,” but that his account does not violate Facebook’s community standards.

“His personal IG account https://www.instagram.com/real_alexjones/ does not currently violate (an IG account has to have at least 30% of content violating at a given point in time as per our regular guidelines).

“However, there’s currently internal discussions around his designation as a hate figure (for internal reference: T42171033). I’lldefer=”defer”to Comms and Strategic Response teams for further information on this.”

If Jones were designated as a “hate figure,” he would be barred from Instagram, and praise or support for his work would be prohibited. (He was barred from Facebook in July.)

As the email chain continues, the Facebook executives then investigate the comments whipped up by Jones’ Instagram post. These included remarks such as “Stop Zionist shilling” and “F—ing jews,” according to a sample of comments seen by Business Insider before the post was removed.

Read more:Instagram is investigating an Alex Jones post that has stoked anti-Semitic hate in the comments

A US-based executive commented: “The 560 comments have been reviewed. Only 23 are violating and therefore the object does not meet the threshold for deletion.”

This was about 4% of the comments, and the offending remarks were deleted. It is not clear how many comments need to break its rules before Facebook deletes the entire post. 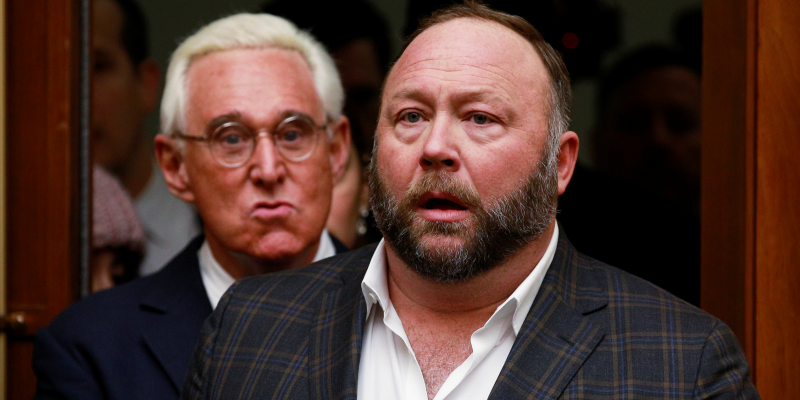 Around this point, a number of UK executives jump into the conversation to make clear their views that Jones’ post is problematic. A policy manager for Instagram was first to raise concerns.

“Sorry for jumping in late but can I check why the image is not considered violating, given the context that this image is widely considered to be anti-semitic? I appreciate on the face of it isn’t clear, but I’d have thought that wide consideration changes things?” the executive said.

Another member of the policy team added: “This image is widely acknowledged to be anti-Semitic and is a famous image in the UK due to public controversy around it. If we go back and say it does not violate we will be in for a lot criticism.”

The person appears to be referring to a controversy last year, when theBritish politician Jeremy Corbyn voiced his supportfor a Mear One mural in London similar to the painting Jones posted on Instagram. After an outpouring of anger, Corbyn later saidhe regretted the remark and made clear that Mear One’s mural was “deeply disturbing and anti-Semitic.”

A Facebook communications executive also weighed in, saying the image was “clearly an anti-semitic [sic] theme,” while a senior figure in Instagram’s communications team had one of the final words on the painting.

In their email, reprinted and pictured below, the Instagram executive said keeping Jones’ post live “undermines” Facebook’s announcement about banning white nationalism. “It will be easy for media to say we’re being inconsistent or ineffectual,” the person said.

“Can I just echo ███ and ███ here – that this is a well-known anti-Semitic image which has received extensive media coverage in the UK.

“FB has literally gone out with a news room post saying that we’re banning white nationalism and reasserting our commitment to not allowing hateful treatment of people based on characteristics such as race, ethnicity or religion.

“Keeping this up undermines this announcement, and it will be easy for media to say we’re being inconsistent or ineffectual with our policy enforcements.

“Please could you let us know why the whole post does not violate?

“Many thanks for your help,

A spokesman for the company said: “We want people to be able to express themselves freely on our platforms, but we also want to make sure that hate speech comes down.”

He added: “That is why we have public rules about what is and isn’t allowed on Facebook and Instagram. As this exchange shows, deciding what content stays up and who can use our platforms is one of the hardest decisions we have to make as a company and it’s sensible that we take the time to get it right.

“As this email correspondence shows, we continually monitor and review whether people are involved in organized hate on our platform. We’ve already taken down InfoWars’ Facebook Page, but Alex Jones has a network of presence online and we are evaluating how to appropriately enforce our policies against him as an individual. We’re committed to being diligent and will share an update when that process has run its course.”

TheInfowars reporter Millie Weaver tweeted at me, saying our story on Wednesday about Jones’ Mear One post was “fake news.”

“We have demonstrated trolls are both making & flagging anti-Semitic comments on social media to take down conservatives like Jones & Infowars under false pretenses,” Weaver said.

Mear One has previously denied the painting is anti-Semitic and described as “hysteria” the idea that the work is a reference to Jewish people.

He made the comments in ablog on the website of the renowned conspiracy theorist David Icke, who has been accused of being a Holocaust denier.

“This mural is about class, not race, and labeling it as anti-Semitic is a divisive, self-interested political tactic,” Mear One added on Twitterin a post he retweeted this week.