Facebook said it accidentally hid bizarre and “inappropriate” messages inside “tens of thousands” of virtual-reality controllers, including “Big Brother is Watching” and “The Masons Were Here.”

Nate Mitchell, the cofounder of Oculus, the Facebook-owned VR company,said on Twitter on Fridaythat the company inadvertently printed some unusual messages in its Touch controllers, handheld devices for playing games and navigating VR environments.

There should have been no internal messages of any kind in any of the devices, but a Facebook representative told Business Insider that the company would not recall them.

“Unfortunately, some ‘easter egg’ labels meant for prototypes accidentally made it onto the internal hardware for tens of thousands of Touch controllers,” Mitchell wrote.

The messages on final production hardware say “This Space For Rent” & “👁The Masons Were Here.👁” A few dev kits shipped with “👁Big Brother is Watching👁” and “Hi iFixit! We See You!👁” but those were limited to non-consumer units. [2/3]pic.twitter.com/po1qyQ10Um

“The messages on final production hardware say ‘This Space For Rent’ & ‘The Masons Were Here.’ A few dev kits shipped with ‘Big Brother is Watching’ and ‘Hi iFixit! We See You!’ but those were limited to non-consumer units,” he said. iFixit is a tech repair company known for publicly deconstructing new gadgets and posting photos of their innards online.

Mitchell added: “While I appreciate easter eggs, these were inappropriate and should have been removed. The integrity and functionality of the hardware were not compromised, and we’ve fixed our process so this won’t happen again.”

The Facebook representative, Johanna Peace, told Business Insider that while none of the affected consumer devices had been shipped yet, they would ultimately go out with the hidden messages.

“To be clear, no devices have been sold with these messages yet, since Quest and Rift S have not yet shipped,” Peace wrote in an email, referring to the company’s other VR products. “That said, as mentioned in Nate’s tweet, the messages will be inside tens of thousands of controller pairs that will ship to consumers when Quest and Rift S ship.”

Peace added: “We think it’s important to be transparent with our community and take responsibility when there’s an error.”

The messages are printed on the “flex,” Peace said, “an internal flexible component of the Touch controllers.” 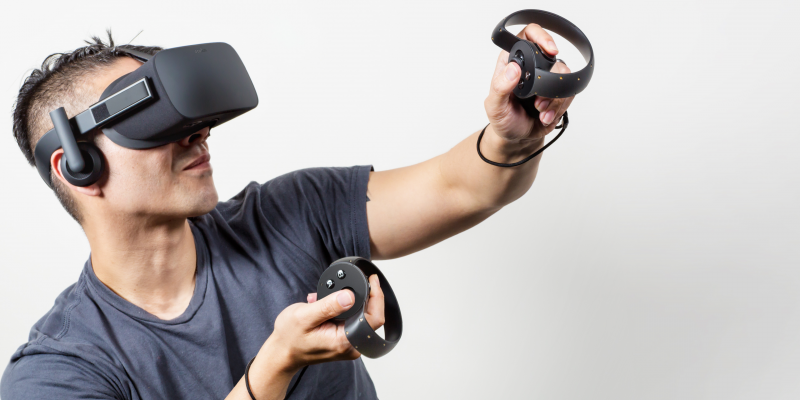 While most users of the Touch controller will never see the hidden messages, it’s an awkward misstep for Facebook, which has faced sustained criticism on privacy issues for more than a decade.

It comes as Facebook attempts to push VR into the mainstream and gears up to launch its long-awaited Oculus Quest, an all-in-one VR headset, in the coming months.

Got a tip?Contact this reporter via encrypted messaging app Signal at +1 (650) 636-6268 using a non-work phone, email at [email protected], Telegram or WeChat at robaeprice, or Twitter DM at @robaeprice. (PR pitches by email only, please.) You can also contact Business Insider securely via SecureDrop.